Restoring an Art Deco Piece on the Ahmedabad Campus

The retrofitting of the old LD Arts building on the Ahmedabad University campus to accommodate the new Amrut Mody School of Management was both - a conservation and an adaptive reuse project. This late Art Deco-style building, only among a handful in the city, was designed originally in 1937 by the Ahmedabad-based architect Atmaram Gajjar. Mr Gajjar designed several buildings on the Gujarat University campus, including other institutions, hostels, and campus facilities.

Given this rich background and the fact that it was among the pioneering institutions for education in pre- and post-independent India, we were acutely aware of the building's historical significance. The embedded histories, legacy, and values the institution represents offer great inspirational opportunities for students. Our design approach was then to keep the architectural illusion as well as the integration of the existing fabric as intact as possible. In order to do this, we restored the public spaces like the entrance foyer, the grand staircase, the verandah, and the corridors to reinforce the robustness of design and highlight the aesthetic elements of these spaces. Any good building has to possess a multiplicity of spaces, something you weave into the plan when you conceive a new piece of architecture. In an old building, this task becomes a challenge as in the process of recycling or adaptive reuse; the foremost priority is to respect the fabric of the building and not alter it too much.

So we worked within the available spaces, reimagining seating, for instance, to foster interaction. We suggested to the University that the space between the School of Arts and Sciences and the Amrut Mody School of Management buildings be articulated to create a space of negotiation, a plaza. Within this plaza, there existed several trees. So what we could not do within the old building, which was to create a range of public spaces, we complemented that by creating these in the plaza. Thus, the range of seating possibilities in the plaza is multifold. Students have possible ways they could sit in groups of different sizes and configurations. The berms could be used to picnic in good weather, and the circulatory system was articulated mindfully to create chance encounters.

It gives the historical structure a contemporary identity that integrates with the rest of the University without interfering with the visual elements of the late Art Deco building. The exterior surfaces of the building have been painted in deep red to highlight elements from the original design, reminiscent of the late Art Deco style that used colour to highlight features such as cornices, chajjas, and other plaster relief on the building facades.

The other elements worth noticing are the metal doors at the entrance and the round rooms on either side of the entry. Among the first elements that visually engages is a grand stair that sweeps you up gently through a double-height volume to the upper floor. The rounded woodwork and details are elegant and have aged beautifully. 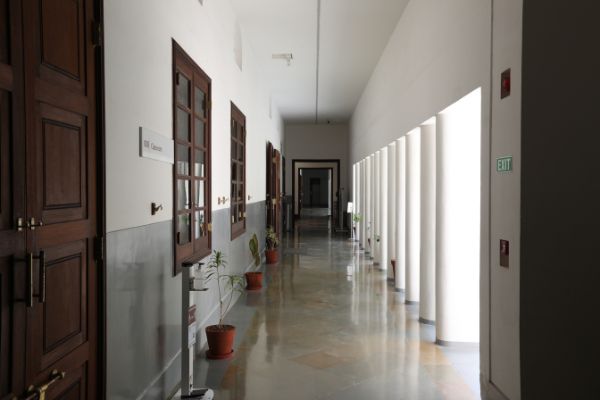 We adapted the interiors to accommodate the new programme as well as to reinforce the spatial integrity of each room. The design imposed some structural challenges. For example, the highly corroded cantilevered corridor chajja on the upper floors needed support. We added additional columns and integrated these to reinforce the corridor's visual rhythm and the quality of light. These additional columns will support any annex added to the building in the future while not compromising the visual aesthetics of the heritage building. The highlight of the restoration included bringing to life the elements in wood that punctuated the central grand staircase, the handsomely panelled doors of the rooms, and the truss system on the upper floor roof. The restoration of the original finish on the wood and the original brass hardware have given a new life to the spaces adding texture and character to the building.

For us, it has been extremely satisfying to reinforce, revive, and restore the robust structure that has been part of the heritage and legacy of Ahmedabad starting in the 1930s. Furthermore, this integration of the existing building with the new buildings on site mediated through a plaza is a wonderful reminder of the legacy on which the present campus of Ahmedabad University has been built.

Rahul Mehrotra is an architect, urbanist, and educator, and the Founder Principal of RMA Architects. This firm reimagined the Amrut Mody School of Management Central Campus for Ahmedabad University and has also designed the School of Arts and Sciences building. Rahul is Professor of Urban Design and Planning at the Department of Urban Planning and Design at Harvard University's Graduate School of Design.