How It Helps In Water Treatment and Fighting Pollution

Ozone is famously known for its presence in the stratosphere as the “ozone layer”, the UV protector of earth. News on the widening of the ozone hole puts scientists and environmentalists in a deep worry from time to time. While it is generally known that ozone is a really essential part of the earth's atmosphere that protects us from the harmful components of the strong rays of the sun, the truth is ozone can be harmful to any flora or fauna if it is found in the breathable zone (generally Troposphere or ground-level). It is so powerful that if inhaled in 2 PPM (parts per million) of ozone for 30 minutes continuously, it can trigger a half-day headache and nausea in a healthy person. So the presence of ozone in the atmosphere is determined to be good or bad depending on which atmospheric layer it is found in. 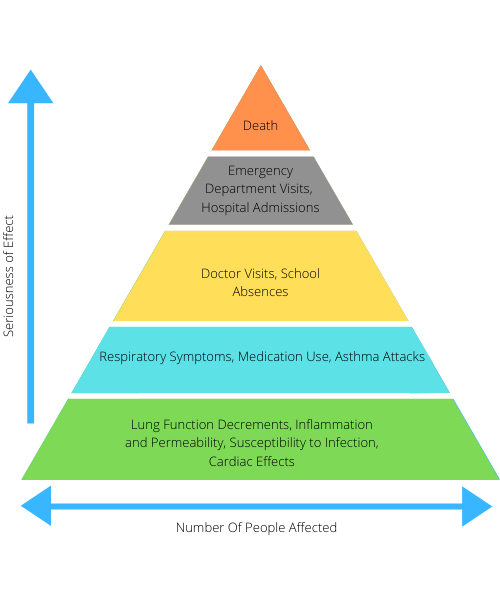 Unfortunately, rapid industrialisation and climate change are shifting the entire calculation of ozone in the Stratosphere and Troposphere. Instead of ozone being in the outer earth layer, the earth's surface ozone concentration is increasing every year due to many man-made causes. The problems related to ozone and the seriousness of their effect on human daily life is depicted in Figure 1.

Despite these adverse effects of ozone on human health, many of us know that bottled water industries are using ozone for purifying water. What could be the reason for that - is it cheap, is it easy to use, is it even required?

The answer to this is that the cost of an ozonation machine is really high, so it is not cheap, but really easy to use and very effective in killing bacteria and commonly found pathogens in water. Since the solubility of ozone in water is very low (comparatively 8 times lower than oxygen), when passed into water, it quickly comes out of it and leaves no smell after 30 minutes. Within this 30-minute contact with water and with almost 10 ppm ozone concentration, it can kill 100% of bacteria and pathogens. It is a good alternative to chlorine treatment which was earlier used by the drinking water treatment industries.

Industries must however take necessary precautions to stop any leakage of ozone into the surroundings and all the water treatment processes must take place in closed chambers. The excessive addition of ozone in water can lead to high running costs of the ozonation machine and also increase the chance of ozone leakage.

Since ozone is a strong oxidising agent, now scientists have started exploring how they can expand its use in the treatment of many other pollutants. Ozone is really good at breaking down bigger organic molecules into simpler and smaller molecules in water. In the last two decades, many studies have found that it can be used as a good oxidising agent to break down greenhouse gases such as NOx, SOx, and VOC (volatile organic compounds).

The emission of NOx from vehicles and power-plants is rising rapidly and technologies to combat this issue are being evolved. One of these technologies is the utilisation of ozone to break down NOx and SOx to HNO3 (or N2) and H2SO4 respectively, by dissolving them in water (as per Figure 2). This has been done in laboratory practice and found almost 100% effective, but to capture atmospheric NOx and SOx and then dissolve them in water is not a viable solution. It is a big engineering and design problem to solve in the area of vehicular emission.

This method can however be adapted by power-plants, if they make changes in the existing systems they use for NOx and SOx removal. The ozonation process is comparatively much simpler, more effective and easy to operate, but at the same time a more expensive. There are only a few power-plants have used the process till now, and worldwide the common SCR process (Selective Catalytic Reduction) is being used although it has many flaws. Ozonation technology has the potential to control vehicular NOx emission, and for removal of NOx, SOx, and VOCs at power plants. A robust engineering design is not available for these applications and is being researched.

The path from the laboratory to the commercialisation of technology is a long route, but it offers powerful solutions to society’s problems. The Chemical Engineering Major at Ahmedabad University prepares students to explore this world.

Dr. Snigdha Khuntia is currently working as an Assistant Professor at the School of Engineering and Applied Science (SEAS), Ahmedabad University, Ahmedabad, Gujarat. She holds a PhD in Chemical Engineering and a Master’s degree in Chemical Engineering, both from Indian Institute of Technology Guwahati, Assam, India. She is the recipient of the DST Early Career Grant from Government of India. Snigdha’s primary research area is in the development of Ozone-based technology for pollution control. She has a keen interest in Membrane technology for water treatment and CO2 capture, and catalysis. She has authored many scientific papers in reputed international journals, and has been a reviewer for many prestigious journals. Her profile can be found here, and she can be contacted by email at [email protected].