Lecture on: The Other One Percent - Indians in America

The Other One Percent: Indians in America One of the most remarkable stories of immigration in the last half-century is that of Indians to the United States. People of Indian origin make up a little over one percent of the American population now, up from barely half a percent at the turn of the millennium. Not only has its recent growth been extraordinary, but this population from a developing nation with low human capital is now the most-educated and highest-income group in the world’s most advanced nation. The Other One Percent is a careful, data-driven, and comprehensive account of the three core processes - selection, assimilation, and entrepreneurship - that have led to this rapid rise. This unique phenomenon is driven by - and, in turn, has influenced -wide-ranging changes, especially the ongoing revolution in information technology and its impact on economic globalization, immigration policies in the U.S., higher education policies in India, and foreign policies of both nations. If the overall picture is one of economic success, the details reveal the critical issues faced by Indian immigrants stemming from the social, linguistic, and class structure in India, their professional and geographic distribution in the U.S., their pan-Indian and regional identities, their strong presence in both higher skill industries (like computers and medicine) and low-skill industries (like hospitality and retail trade), and the multi-generational challenges of a diverse group from the world’s largest democracy getting into its oldest.

About the Speaker:
Devesh Kapur was appointed Director of the Center for the Advanced Study of India in 2006. He is Professor of Political Science at Penn and holds the Madan Lal Sobti Chair for the Study of Contemporary India. Prior to arriving at Penn, Professor Kapur was Associate Professor of Government at the University of Texas at Austin, and before that the Frederick Danziger Associate Professor of Government at Harvard. His research focuses on human capital, national and international public institutions, and the ways in which local-global linkages, especially international migration and international institutions, affect political and economic change in developing countries, especially India. His book, Diaspora, Democracy and Development: The Impact of International Migration from India on India, published by Princeton University Press in August 2010, earned him the 2012 ENMISA (Ethnicity, Nationalism, and Migration Section of International Studies Association) Distinguished Book Award. His latest book, Defying the Odds: The Rise of Dalit Entrepreneurs (co-authored with D. Shyam Babu and Chandra Bhan Prasad), was published in July 2014 by Random House India. Professor Kapur is the recipient of the Joseph R. Levenson Teaching Prize awarded to the best junior faculty, Harvard College, in 2005. He is a monthly contributor to the Business Standard. Professor Kapur holds a B. Tech in Chemical Engineering from the Institute of Technology, Banaras Hindu University; an M.S. in Chemical Engineering from the University of Minnesota; and a PhD from the Woodrow Wilson School at Princeton. 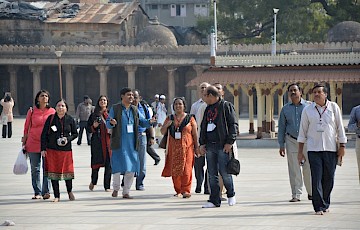 Asmita Kiran II: A Management Development Programme on Heritage Walk Pathways to Connecting to Our Culture