In the fifth Nalanda of 2019-20, on December 14, Carnatic music vocalist, writer, activist and author, TM Krishna was in conversation with educationist and member Board of Governors of Ahmedabad University, Shri Prafull Anubhai.

Referring to ‘magic’  and ‘magical experience’ in music, Krishna said that magical moments in music do not occur by chance but all musical training that artists undergo are aimed towards attaining such moments. Further through the conversation Krishna also said that music means training, practice and life experience. He said that musical performance is a summation of these, and this is not something one can conceivably think through.

The conversation also touched upon the role of music as communication. Providing food for thought to the audience, Krishna mused, “What is the experience of an individual discovering art for himself? Can art be thought of as communication with the self?” He continued, “If you ask me what is the intention of me singing, there is something very tactile in it, in its form. Its an emotionality which is also part of form”. Krishna said that art and art experience is not an accident but a conscious human endeavour and that, communication is a secondary aspect, almost a by product of this human endeavour.

While addressing a question from Anubhai on how one can reconcile the idea that the artist on stage is so often a person very different from the artist outside the stage, Krishna conceded that art can momentarily transform an artist into an entirely different personality. He said, however, that it is not  necessary to reconcile between these two personalities. He believes it to be a natural human tendency, one shared by an artist as well.

When asked about how he manages between art and social consciousness, Krishna said that he doesn't see the act of engagement with the larger society as separated from the act of singing. He said that it is through the lens of his “art” that he develops a social voice, social consciousness and in that sense his art cannot be separated from his social consciousness. He asked, ”If you are moved by music, how are you not engaging with the society?” Krishna said that Carnatic music is an art form that is entrenched in certain social orders. He said, “Just as Carnatic classical gives you a world view of their social life, the songs of the courtesans of the palace give you a world view of their life”.

Further during the conversation, Krishna said that the most important thing in life is being uncomfortable. He said that to be uncomfortable is to have the impetus to cause change. Krishna told the audience to confront such beliefs that the traditional or classical is pure, or good. He expressed the significance of being conscious of one’s privilege and elitism and questioning the conventional through one's art form. “It is through this lens that one can use art to cause change in society,” he said. 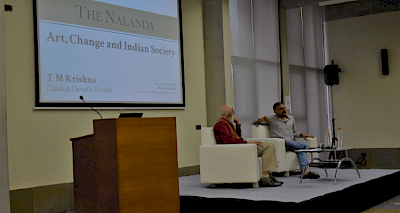 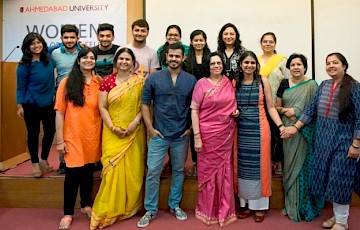 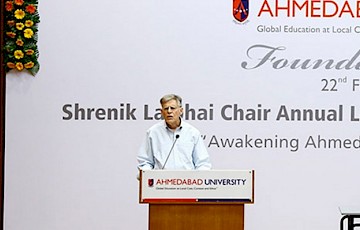