Lecture on: Mitigating Tsunami Risk in the Indian Ocean A state-of-the-art tsunami warning system set up in October 2007 is a classic case of use of satellite-based communication and remote sensing, computing, and GIS to mitigate the risk of tsunami in the Indian Ocean. The system is capable of receiving and analyzing seismic data for estimating earthquake parameters as well as tidal and sea levels, received from the Indian and global stations in real time. Model simulations based on earthquake parameters are being used to generate advisories about travel time, run up height at 1800 coastal forecast points and are provided within 10 minutes to all concerned stakeholders of the Indian Ocean Rim countries, including India. Hence, it is also recognized as the Regional Tsunami Warning System by UNESCO/ IOC. This is the only system which takes care of both tsunamigenic zones, the Makran and the Sumatra subduction zones. The system has provided very useful advisories during the last ten years to all countries in the Indian Ocean Region and has performed as per laid down standards. With GPS and accelerometer network in the Andaman and Nicobar Islands, underestimation of the magnitude of earthquakes is avoided.

About the speaker:
Dr Shailesh Nayak is currently ‘Distinguished Scientist' in the Ministry of Earth Sciences, Government of India, and President, International Geological Congress. He obtained PhD degree in Geology from the M.S. University, Baroda in 1980. He was the Secretary, Ministry of Earth Sciences, Government of India, during August 2008-2015, and provided leadership for programmes related to earth system sciences. He has been credited with launching many research programmes related to the monsoon, air-sea interaction, changing water cycle, atmospheric chemistry, coastal vulnerability, climate services, polar science, etc. with US, UK, Germany, Japan, Australia, Norway, South Korea. His restructuring of meteorological activities in the country led to improved weather and hazard-related services. He had set up the state-of-the-art tsunami warning system for the Indian Ocean in 2007 in just two years, providing tsunami advisories to the Indian Ocean Rim countries. He pioneered in the development of algorithms and methodologies for the application of remote sensing to the coastal and marine environment and generated baseline database of the Indian coast.

He is a Fellow of the Indian Academy of Sciences, Bengaluru and the National Academy of Sciences, India, Allahabad. He has been awarded Honorary Degree of Doctor of Science by various Universities in India. Recipient of the prestigious ISC Vikram Sarabhai Memorial Award 2012, Bhaskara Award 2009, Fellowship of the International Society of Photogrammetry & Remote Sensing (ISPRS) and Academician of the International Academy of Astronautics (IAA), Dr Nayak has published about 150 papers in peer-reviewed journals. The Conversation Series: The Science and Economics of Climate Change 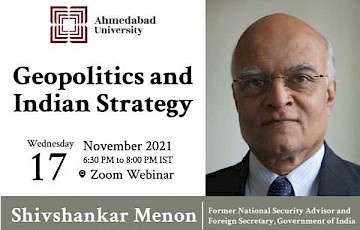 The Conversation Series: A New Paradigm for Development: Economic Growth and Social Wellbeing