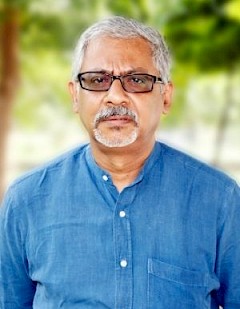 Anjan Ananda Sen is a Professor in the Mathematical and Physical Sciences division of the School of Arts and Sciences at Ahmedabad University. He contributes to the research programme in Gravitation and Cosmology with his expertise on Dark Energy and Modification of Einstein's General Relativity, and teaches courses on General Relativity, Cosmology and Quantum Field Theory in addition to other courses in Physics.

His current research is related to the cosmological evolution of our Universe and formation of structures in the Universe. Professor Sen did his PhD thesis on gravitational properties of topological defects. After this, he did post-doctoral studies at the Harish-Chandra Research Institute in Allahabad, at the Instituto Superior Técnico at University of Lisbon, Portugal, and at the Department of Physics and Astronomy at Vanderbilt University, Nashville, USA.

Professor Sen is a member of the international science team for TMT (the Thirty Meter Telescope), the future largest optical telescope in the world. He is also a member of the SKA-India Science Committee for the Square Kilometre Array project, the largest Radio Telescope to be constructed in South Africa and Australia. He is the Associate member for the SKA science working group for cosmology, and has been the Coordinator for the SKA related activities for the “Vigyan Samagam” programme of the Government of India. He was a Regular Associate of Abdus Salam International Centre for Theoretical Physics, Trieste, Italy as well as an Associate of IUCAA, Pune, India, and a recipient of the Visitor Award for Best Research by the President of India in 2015. Professor Sen was elected as a Fellow of the National Academy of Sciences, India in 2016.