In its recently released report, the Intergovernmental Panel on Climate Change (IPCC) has said that while the average annual global greenhouse gas emissions were at their highest levels in human history from 2010 to 2019, the rate of growth has slowed. While he advised about exploring untapped potential, Working Group III Co-Chair Priyadarshi Shukla said that a 40 to 70 per cent reduction in greenhouse gas emissions was possible by 2050. This would require continued and progressive action on sectoral policies, lifestyle changes and macroeconomic policies. The IPCC includes key people from Ahmedabad University’s Global Centre for Environment and Energy (GCEE). Besides Professor Shukla, a Distinguished Professor at the Amrut Mody School of Management and Director (GCEE), Senior Scientist Minal Pathak, Scientist Shreya Some and Science Officer Purvi Vyas, are drafting authors and editors for the report.

The GCEE is a one-of-its-kind Centre of Excellence at Ahmedabad University that fosters and pursues interdisciplinary research and designs technological and social experimentation related to climate change, energy and natural resources. It hosts the Technical Support Unit of the Mitigation Working Group of the IPCC. It also works closely with members of the Centre for Environmental Policy, Imperial College London, and collaborates with global and Indian universities, research institutes and industries to pursue sustainability research.

The IPCC report further said that since 2010, costs of solar and wind energy and batteries have decreased by 85 per cent. An increasing range of policies and laws have enhanced energy efficiency, reduced deforestation rates, and accelerated the deployment of renewable energy. The Summary for Policymakers of the report Climate Change 2022: Mitigation of Climate Change was presented in a virtual press conference from the UK and was approved in a meeting attended by over 350 government delegates representing the UN member governments.

The allied report observed that India’s large-scale pro-poor LPG subsidy project for cooking purposes had found widescale acceptance. Still, it hasn’t wholly replaced the use of fossil fuels for cooking. About the Indian Government’s proposal for a complete transition to an all-electric vehicle fleet by 2030, the report stated that the demand for the same showed a significant potential for increasing the share of electric two-and three-wheelers. It also quantified the benefits of converting public transport to electric transport, especially in Bengaluru’s municipal buses, based on reductions in greenhouse gases and fine particulate matter (PM2.5) emissions. Additionally, policy decisions for efficient air conditioning, a shift to LED lighting, and industrial efficiency were reported to have saved India 25 million tonnes of oil equivalent (Mtoe) in 2019-2020, thus leading to avoided emissions of over 150 metric tonnes of carbon dioxide (MtCO2). It also said that India’s solar programme is a crucial element that can help mitigate climate change, but it needs to be evaluated vis-a-vis energy alternatives like green hydrogen, nuclear or carbon capture, utilisation and storage (CCUS). The Earth Is Very Close To Tipping Point 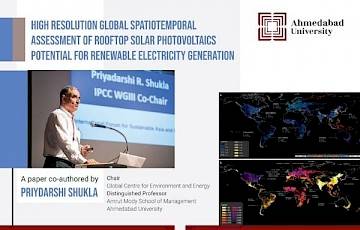