2070 is too late to move to net-zero. But it is a good negotiating position for India

The 1940s were a time of accelerated history. Old assumptions changed fast, and new systems were made, in India and globally. The same is true of the 2020s. The climate crisis is happening now. It is not tomorrow’s story. Global warming and extreme weather events are becoming familiar not only in small island nations or low-lying, salinated parts of Asia, but across Europe and North America.

Climate systems are being disrupted. We do not know what will happen to the Amazon rainforests, the global ocean conveyor belt, or the ice sheets of the Arctic and Antarctic. In India, extreme summer heat is not unusual, and so people are obliged to be adaptable. We must hope that the monsoon keeps working.

Last week at COP26, India made major new policy commitments on climate. On renewable electricity (RE) generation, India committed to 50% by 2030, presumably via solar, wind, hydro and nuclear. This is an ambitious, but deliverable, target. India will be moving to electric vehicles (EVs). Perhaps most significantly, India pledged to achieve net-zero carbon emissions by 2070. As the world’s third-biggest emitter of greenhouse gases, this is a landmark decision.

Third, Narendra Modi requested specific commitments from richer countries on the funding of the energy transition throughout the global south. Large promises have been made in the past, but he wanted to know where the money was. An energy transition to renewables has huge, upfront costs, which scale and reduce over time, since we do not need to buy fossil fuels any longer. But the investment needs to be funded.

In practice, 2070 is too late to move to net-zero. But it is a good negotiating position for India, which has strong bilateral diplomatic relationships with many of the world’s richer nations. You want us to move faster? Sure, we can even prepone to 2050 if you fund the energy transition (overtaking China, which made a unilateral decision last year to commit to net-zero by 2060). You want us to to reduce cement and steel production, and stop pulling coal out of the giant, terrifying coal pits of Chhattisgarh? Yes, please fund this transition.

It is not only governments that are ready to pay for the changes. At COP26, a consortium of financial institutions led by economist Mark Carney, a former central bank governor of the Bank of Canada and Bank of England, announced a climate finance commitment of $130 trillion (Rs 9,645 lakh crore). This was global capitalism incarnate making a grave strategic choice. If -- as environmentalists have been saying for the last 50 years -- global heating represents an existential threat to humanity, and ‘There is no Planet B’, the financial system needs to rethink how to keep the coal in the ground, and keep oil and gas under the oceans.

Increasingly, carbon-producing energy sources such as oil and coal are regarded by policymakers as stranded assets. If we need to keep fossil fuels in the ground, and so avoid the risk of a temperature rise of more than 1.5-2.0°C, these need to be priced and paid for -- whatever the cost may be. In practice, nobody knows quite how this is going to work.

At the moment, gas and oil prices are surging, since many countries, China in particular, are seeking to put in carbon-intensive infrastructure, in advance of scaling back their economies to renewables, and hitting the targets they have promised. They are like St Augustine of Hippo, who offered the prayer, ‘Lord, make me holy -- but not yet.’

Where does this leave India? It requires a major conceptual transition that will need broad support of state and central governments, of political parties that dislike each other, and commitments to legislative change. It will mean rethinking new and old methods of building, using renewable timber, woven reeds, cross-ventilation and fast-growing bio-engineered buildings -- something like rapid, modern versions of the constructions of previous generations. It will mean leaving forests uncut, and letting stone remain in quarries and in the mountains. It will mean a complex, phased transition out of coal-generated electricity production. It will mean a reduction in the risk of India creating millions of climate refugees.

Those of us who live in cities like Delhi, Ahmedabad, Kanpur and Gwalior know how intense summer heat can be. But imagine that the temperature rises a few degrees higher… Once outdoor heat passes 50°C, all bets are off. People will pack up their belongings and head north, where the climate should be cooler. At the moment, states like Uttarakhand or Himachal Pradesh are at a stage of flux, as people from the plains invest in cooler climate boltholes. But imagine what would happen if 20 million climate refugees arrived in the Himalayas.

Where does the climate crisis, and the talk and commitments of COP26, leave the world now? The truth is that nobody knows how global warming of a minimum of 1-5-2.0°C is going to play out. We do not know if the changes will be gradual, or exponential, or how one part of climate change will interact with another.

We are concerned about the melting of permafrost, glaciers, and the poles of the planet. But more than 90% of global heating goes into the world’s oceans. Will it stay there, and emerge gradually over the next few hundred years? Will it disrupt ocean and weather patterns? We must hope for the best. 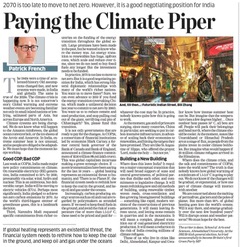 Breakthrough Research on Rapidity of Evolution