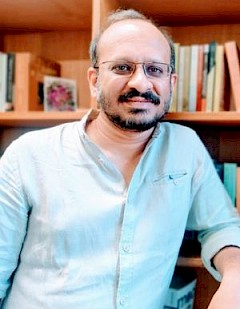 Rahul Sarwate is a historian of Modern South Asia.

He is currently working on a book-manuscript, which is a revised version of his PhD dissertation, Reimagining the Modern Hindu Self: Caste, Untouchability and Hindu Theology in Colonial South Asia, 1899-1948 defended in the History department at Columbia University, where he examined the interrelations between forms of Hindu-ness and the narratives of cultural progressivism in the particular context of the western Indian region of Maharashtra. Rahul's research concerns the production of modern ideas about self, society and nation, articulated through sites such as caste-based vernacular print publics, literary culture and theological debates and is grounded in the materiality of bodily and labour practices.

Rahul is also interested in exploring the various genealogies of anti-caste thought in Modern India and is currently translating a Marathi text, Marxism-Phule-Ambedkarism (1993) by Sharad Patil (1925-2014) for Navayana Press, New Delhi.

Apart from History, he has also been curious about novels in Indian regional languages, Tamil cinema and Marathi theatre.