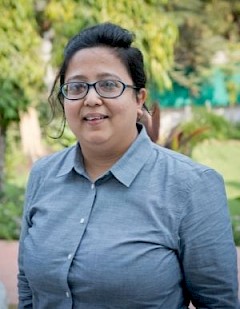 PhD (University of Texas at Austin)

Manomohini Dutta is Assistant Professor in the Humanities and Languages division of the School of Arts and Sciences. She received her PhD in Asian Cultures and Languages from the University of Texas at Austin.

Her areas of research are rooted in pre-modern Indian history and span the fields of law and religion, Dharmaśāstra, and Sanskrit. Her current research focuses on inheritance, property, and women’s conceptual positions in the Dāyabhāga, an influential specialized treatise on inheritance, from medieval Bengal located within the Brahmanical legal tradition of the Dharmaśāstras. Manomohini has published her research in international peer-reviewed journals like the Journal of Indian Philosophy and The Journal of Hindu Studies.

At Ahmedabad, Manomohini enjoys teaching courses that revolve around pre-modern Indian history, world religions with a focus on Hindu religious traditions in the BA Major in History along with being a part of the interdisciplinary Foundation Programme.

Dutta, Manomohini. 2019. “Dāya: The Conceptual Understanding of Inheritance and Gift in the Dāyabhāga.” Journal of Indian Philosophy, 47.1, 111–131.

The Birth and Development of Civilisations in the Indian Subcontinent, HST 115, Ahmedabad University, Bi-semester 2020-2021.

“Upakāra: The Theory of Spiritual Service and Women’s Inheritance in the Dāyabhāga.” Dialogues, Department of Humanities and Social Sciences, IIT Gandhinagar, Gujarat, August 2019.

“The Theory, Structure, and Degrees of Svatva in the Dāyabhāga.” 229th Annual Meeting of the American Oriental Society, Chicago, Illinois, March 2019.

“Kings in Distress: A Study based on the Āpaddharmaparvan of the Mahābhārata.” Southwest Conference on Asian Studies, Austin, Texas, October 2009.

“Making the Past come to Life: History, Texts and Performance.” Session delivered jointly with Aparajita Basu at Liberal Arts Pedagogy in New India: The Relevance of Humanities and Social Sciences – A Workshop for School Teachers / Counsellors. School of Arts and Sciences, Ahmedabad University (online on Zoom), April 2021.