On 6th January 2021, Professor Sarthak Bagchi, Assistant Professor of Humanities and Languages from School of Arts and Sciences, Ahmedabad University was in conversation with Dr TCA Raghavan, historian, former high-commissioner to Pakistan and current Director General at the Indian Council of World Affairs.
The conversation was revolved around the themes of the Past and Future of India-Pakistan Relations.

Professor Bagchi initiated the conversation with an insightful question. Noting that both India and Pakistan had extraordinary similarities – having many of the same traditions and institutions - he wondered why it was that Indian Democracy seemed to have flourished, whereas Pakistani Democracy seemed to have played a seemingly minor role in its post - independent history.
Acknowledging the need for this query, Dr Raghavan responded with a comprehensive answer that would set the tone and theme for much of the following hour.

Dr Raghavan noted that Pakistan was born as a secessionist state, breaking away from India in 1947. It was forced to build some of its institutions, such as a National Assembly and the Supreme Court, whereas India had them already.
Further, Pakistan had to change itself from the idea of a Province to that of a nation, which, along with a lack of fundamental institutions, posed as one of the greatest administrative challenges. As he would observe later, this created a rather fuzzy image of what Pakistan is, for its people.

Another theme that presented itself during the talk was that of militarization and how it differed amongst the two nations. It became clear that it was important to be historically sensitive to the approach of dealing with politics of India and Pakistan, when Dr Raghavan remarked on the geographical significance of Punjab. Much of the manpower for the British Indian Army was directed from Panjab, during the Colonial era. It was not to be wondered at that, when Punjab was engulfed into Pakistan, it resulted in an excessive militarization.

Dr Raghavan stressed that it was this imbalance – excessive militarization on the one hand and less-developed administrative infrastructure on the other – that affected many of the crucial developing policies in the 1050s, in shaping Pakistan.

Subsequently, Dr Raghavan touched on the rather un-remarked-upon issue of Pakistan’s federal policies. It was important to note, he said, that for the first 25 years of its developing history, Pakistan was constituted of two wings separated by India: East and West Pakistan. The conversation moved towards the issue of minorities, the difference in demographics that divided the concerns of East and West Pakistan, and how rights could be managed of two very different people who, officially, lived in the same country.
Harking back to the initial discussion on the diverging trajectory of Pakistan’s democracy, Dr Raghavan noted that split of East and West Paksitan added to the fuzziness of the very idea of Paksitan, and thus its democracy.

Following the theme of East and West rights, Professor Bagchi juxtaposed the present with the past, asking what the Nehru-Liaquat pact said about the minorities in Pakistan, and how that may be relevant in the current context of the CAA (Citizen Amendment Act, 2019). Acknowledging that the ultimate test of a democracy is how the minorities are governed, Dr Raghavan observed that while West Pakistan saw comprehensive ethnic cleansing, forcing Sikhs and Hindus to move to India and leaving virtually no minorities, East Pakistan did not have the same kind of ethnic cleansing. A significant fraction of Hindus retained their presence.
The pact, then, was meant to be applied to the very specific minority situations that existed in East Pakistan and Eastern India (in Assam particularly). Dr Raghavan opined that the pact, regardless of its dubious efficacy, pacified people and possibly averted greater conflict.

On this note, he stressed the dangers of comparing the minority politics of India to that of Pakistan. “It is not comparable… We do not have the same scale of minorities”.

Subsequently, Dr Raghavan opined that there was a tendency in Pakistan to conflate National Interest with National Security. With its military background it is not surprising that the security-related lens is all-pervading for Pakistan. While this is present in India too, it is much diffused, he said.

Towards the conclusion, Dr Raghavan asserted that to better understand India-Pakistan relations, it is imperative that we as Indians place ourselves in the shoes of our smaller neighbours, saying that India’s cultural hegemony in Pakistan is little-understood and underappreciated.
We must also acknowledge that we have very much to learn from visiting our neighbours. A total disengagement amongst our nations will result in great cultural loss (referring to the recent ban of artists from Paksitan), and will not resolve conflict.
While it may not necessarily make better policies, an open-minded approach to our neighbours can lead to greater interpersonal development,and that perhaps more than policies, that may be the need of the hour today. 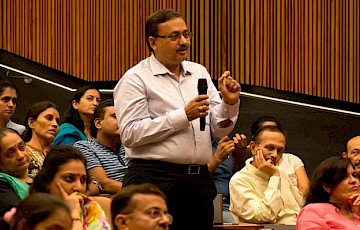 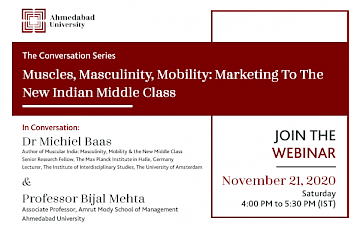