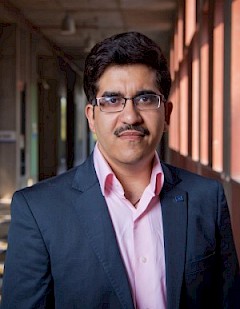 Deepak Verma is working as Assistant Professor at School of Engineering and Applied Science, Ahmedabad University. He received MSc. Degree in Physics from IIT Roorkee (University of Roorkee) in 2000, M. Tech. Degree in Energy Management from Devi Ahilya Vishwa Vidyalaya, Indore in 2002, and PhD from IIT Delhi in 2009. He has more than 4 years of post-doctoral research experience on photovoltaic materials, Kelvin probe force microscopy and photovoltaic systems.  Before joining Ahmedabad University, he was working as a postdoctoral research fellow with the Department of Engineering & Science, University of Agder, Norway from 2010 to 2013 and Institute of Physics, Praha, Czech Republic from 2013 to 2014.

Current Research Interests
Deposition and Characterization of Perovskite thin film solar cell Research efforts are mainly focussed on designing new materials, the understanding mechanism underlying towards improving the efficiencies, design, and development of novel solar cell structures. In spite of all these efforts made by the scientist all over the world, the stability and the layers preparation are perhaps the main factors preventing the commercialization of this technology. Perovskite crystal structure decomposed upon exposure to humidity. There is evidence of weak performance of the solar cell at elevated temperature and under UV light exposure. An encapsulated PSC will work only for few hours under illumination.  Hence, more efforts experimentally & theoretically are required to understand the failure and degradation mechanism towards improving the life of the large area perovskite photovoltaic cell.

Photovoltaic System performance analysis  The project will deliver results relevant for photovoltaic power plant designing and installation, including small-scale PV systems. The project will also increase general awareness on end use of photovoltaic technology. The project will clearly bring out the facts which technology is best suitable for the given location over a period of time; it will give information regarding stability and degradation of different PV systems in long run. It is an important aspect for the PV engineers. There are several PV systems have been installed across India but present system will give the comparative data of different types of PV modules at one particular location under real outdoor conditions which will provide the useful information for other installations in neighboring cities.